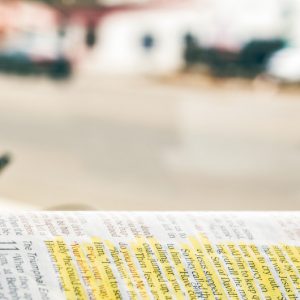 During most non-leap years such as this year (2010/5770), Torah students consider both the Tazria (Leviticus 12:1-13:59) and Metzora (Leviticus 14:1-15:33) portions for weekly study. These selections detail how the Ancient Israelites and Levitical priesthood were to deal with a unique disease translated as “leprosy” (Heb. tza’arat). Also seen is instruction about bodily fluids emanating from genital organs—with far more specificity than many Bible readers prefer to discuss publicly. Rabbis and scholars alike have speculated down through the millennia what these descriptions mean, and most especially whether or not they have any relevance for modern people.

Naturally, because of the preponderance of the contrast between the clean and the unclean, Torah commentators tend to emphasize and stress the uniqueness of these instructions. The admonitions to maintain a “clean” (Heb. tahor) status, in order to participate in the worship activities associated with the Tabernacle and sanctuary, were a great incentive to the Israelites to monitor their behavior—especially when it came to personal hygiene, touching the dead, or an infection. Nothing could be more humiliating than a “leper” being forced to announce to passersby that he or she is tamei or “Unclean!”:

“As for the leper who has the infection, his clothes shall be torn, and the hair of his head shall be uncovered, and he shall cover his mustache and cry, ‘Unclean! Unclean!’” (Leviticus 13:45).

Separation from the community must have been excruciating for those afflicted.

Logically, the Sages chose two classic descriptions of people suffering from leprosy when it came to selecting the corresponding Haftarah readings. These include the healing of Naaman after dipping seven times in the Jordan (2 Kings 4:42-5:19), and the account of the four lepers who discovered the abandoned camp of Arameans, saving Israel from the siege that was starving them (2 Kings 7:3-20). Understandably, elements of the Tazria and Metzora instructions for healing and being separated from the camp for a period of isolation, are found in these passages.

The challenges of both leprosy and being ceremonially unclean are witnessed in the Apostolic Scriptures, as there are instances of the Messiah Yeshua cleansing people by either a touch or a word. Yeshua would not only miraculously heal those who were afflicted, but He would also instruct those He healed to go to the Temple, fulfilling the Torah’s instruction, and using their healing as an opportunity to testify to the priests of Him:

“And a leper came to Him and bowed down before Him, and said, ‘Lord, if You are willing, You can make me clean.’ Yeshua stretched out His hand and touched him, saying, ‘I am willing; be cleansed.’ And immediately his leprosy was cleansed. And Yeshua said to him, ‘See that you tell no one; but go, show yourself to the priest and present the offering that Moses commanded, as a testimony to them’” (Matthew 8:2-4).

Without any doubt, encountering lepers being miraculously cleansed of their defilement helped confirm to witnesses—most especially the Disciples—that Yeshua was the Messiah and Savior. Yeshua Himself instructed that John the Immerser be told of the acts that He was performing, so that he would take encouragement from it:

“Yeshua answered and said to them, ‘Go and report to John what you hear and see: the BLIND RECEIVE SIGHT and the lame walk, the lepers are cleansed and the deaf hear, the dead are raised up, and the POOR HAVE THE GOSPEL PREACHED TO THEM [Isaiah 61:1]. And blessed is he who does not take offense at Me’” (Matthew 11:4-6).

Word spread throughout the region about the healing feats of this itinerant teacher from Galilee. As is recorded, people began to seek out Yeshua to not only hear His words of wisdom, but many also desired to see if it were possible for personal healings to occur. One of the classic cases of someone seeking the healing touch of the Messiah is seen when a faithful woman is cured of a hemorrhage issue that she had had for twelve years (cf. Leviticus 15:19):

“But as He went, the crowds were pressing against Him. And a woman who had a hemorrhage for twelve years, and could not be healed by anyone, came up behind Him and touched the fringe of His cloak, and immediately her hemorrhage stopped. And Yeshua said, ‘Who is the one who touched Me?’ And while they were all denying it, Peter said, ‘Master, the people are crowding and pressing in on You.’ But Yeshua said, ‘Someone did touch Me, for I was aware that power had gone out of Me.’ When the woman saw that she had not escaped notice, she came trembling and fell down before Him, and declared in the presence of all the people the reason why she had touched Him, and how she had been immediately healed. And He said to her, ‘Daughter, your faith has made you well; go in peace’” (Luke 8:42a-48).

This woman must have been quite desperate, wanting to regain access to the places of worship in Jerusalem, which she was prohibited from entering because of her chronic condition. The personal nature of either menstrual flow or seminal emissions are usually only known by the individual, meaning that following the prohibition to avoid contact with others or enter the sanctuary would often have been a willful choice of the person experiencing these conditions. Obeying the Leviticus 15 restrictions, then, would have been a matter of personal conviction. The person who dealt with the fluid emissions had to come to terms with his or her physical condition, and respond accordingly to the Torah instructions. Upon reviewing the prohibitions, it is clear that the woman with an issue of blood mentioned took a great risk—because in the most technical sense she would have made the Messiah Himself “unclean,” by her actions:

When you read through the description of what becomes unclean due to menstrual impurity, and how relatively easy it might be to come into some kind of contact with an object that has simply been touched by a woman experiencing her monthly cycle—you might begin to think that it is very difficult to avoid becoming “unclean.” All you might have to do is sit on a park bench, or touch a handrail, and immediately become “unclean.” You might understand some of the strictness of why many Orthodox Jews have separate beds for married couples, and frequently separate out men from women. At the same time, nothing is stated in the Scriptures that makes this type of “uncleanness” akin to a moral or ethical defilement. Ultimately, the kind of uncleanness witnessed in Tazria-Metzora simply prohibits one from entering into the Temple or Tabernacle. At most, this would mean that if one were in Israel today, you would need to be very cautious when walking around some of the holy sites associated with the Temple Mount.

When you reflect on the way Yeshua handled the situation with the woman who touched Him, it is clear that the Lord was more concerned about her faith in wanting to be healed than some of the technical details of Leviticus 15. The Messiah did not rebuke the woman and then send her on her way; He instead commended her, acknowledging how His power had set her free from her ailment and the humiliation that she had carried for so long.

This is a wonderful testimony for all of us living today to reflect upon. In many regards—due to the interactive movement of people in the marketplace—many of us find ourselves to be technically “unclean” according to the Torah, often without being consciously aware of it. If we can recognize that most of this “uncleanness” has to relate to the normal functions of our body, and that it is frequently not associated with sin, then we can be assured that we can still pray to God and communicate with Him. At the same time, there are people who are plagued by physical ailments, which they keep to themselves. How many individuals do you interact with, who might need a prayer of healing? Do you ever offer up a quiet prayer for people you see on the street? What would Yeshua or the Apostles do? Without faith in the Lord, being “clean” is not possible.

I praise the Lord how today all of us can be clean! While we can be cleansed of our sins through the precious blood of the Messiah—we can also be healed of physical ailments. I challenge each of us to always have the confidence of knowing that He offers redemption not only from the moral defilements of sin, but the many bodily pains we might suffer.