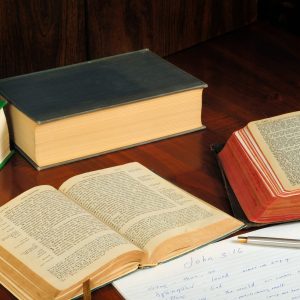 But she will be saved through the Child-Bearing, if they continue in faith and love and sanctification with sensibility (1 Timothy 2:15, PME)

The customary rendering of 1 Timothy 2:15, says that women will be saved “through the bearing of children” (NASU). This has then been concluded to mean that the safe place for females to live lives of salvation, is in motherhood and child rearing.

The more literal rendering of the Greek clause dia tēs teknogonias is “through the childbearing” (LITV) or “through the(her) childbearing” (Brown and Comfort, 728; Marshall, 615). A number of specialty versions make the point to translate the definite article tēs: “she will be saved by the Child-bearing” (Montgomery New Testament); “she will be saved by means of the Birth of the Child” (Source New Testament).

Various complementarian examiners of the Pastoral Epistles have had to recognize that “through the Childbearing/Childbirth,” a reference to the birth of the Messiah via the line of Eve (Genesis 3:15), is the best rendering for dia tēs teknogonias, recognizing that eternal salvation is in view and that females do not “get saved” by having children, but instead through the Messiah (Donald Guthrie, Tyndale New Testament Commentaries: The Pastoral Epistles [Downers Grove, IL: InterVarsity, 1990], 89; George W. Knight III, New International Greek Testament Commentary: The Pastoral Epistles [Grand Rapids: Eerdmans, 1992], 146).